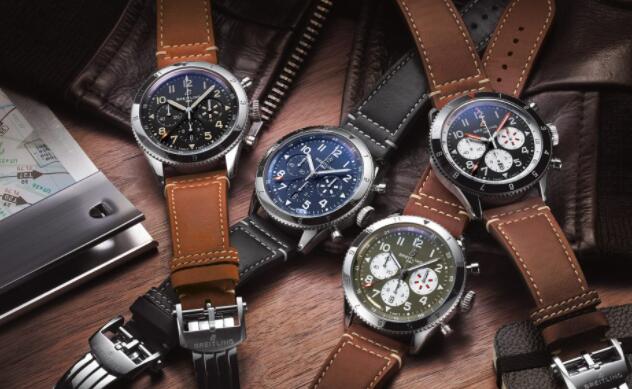 Swiss watch manufacturer Breitling celebrates four historic aircrafts, the North American Aviation P-51 Mustang, the Vought F4U Corsair, the Curtiss P-40 Warhawk, and the de Havilland Mosquito with the release of five Breitling Super AVI B04 Chronograph GMT 46 watches.
The heart and soul of the Breitling brand is their heritage within aviation. At the very beginning of their history, Leon Breitling introduced to the world two chronographs with a unique reset button, a major step in the development of the wrist-wearing chronograph and a design sold largely to those in the aviation industry. Four decades later in 1938 and Leon’s son Willy established the Huit Aviation Department credited for creating chronographs for military aviators particularly that of the Royal Air Force.
Then in 1953, Breitling introduced one of their most significant flight instruments known as the Ref.765 AVI pilot’s watch. It had an impressively bold rotating bezel and oversized Arabic numerals offering impeccable legibility making it an instant favourite among flyers. Early last year, the Swiss watch manufacturer the AVI Ref. 765 1953 watch, a carefully researched and crafted re-edition honouring this classic chronograph. Today, they continue to honour its legacy with an entire Breitling Super AVI watch collection combining vintage aviation aesthetic with modern technologies.

“This collection embodies that sense of nostalgia for the early days of aviation when pilots relied on their watches as onboard tools,” says Breitling CEO Georges Kern. “But you don’t have to be a pilot or vintage-aircraft buff to appreciate the exceptional craftsmanship and rugged design.”
The new Breitling Super AVI watch collection delivers five stunning models, each commemorating their own legendary aircraft. Two of the models are named the Super AVI P-51 Mustang honouring one of the best all-round fighter planes in the world, the first in stainless steel with a black dial and golden-brown leather strap and the second in 18 carat rose gold opting for an anthracite dial and black leather strap. Next up is the Breitling Super AVI Tribute to Vought F4U Corsair, a WWII naval aircraft with a navy and black livery. These colours are brought to life on the blue dial, tone-on-tone chronograph counters and black leather strap.

The fourth watch in the Breitling Super AVI B04 Chronograph GMT 46 collection is the Super AVI Curtiss Warhawk which pays homage to its namesake’s famous shark-mouth nose art with a military green dial, steel case, white contrasting chronograph counters and bold red accents. Lastly, the Breitling Super AVI B04 Chronograph GMT 46 collection introduces the Super AVI Mosquito, a timepiece inspired by the “Wooden Wonder” plane known for its famous wooden construction and it’s record as one of the fastest planes built between 1940 and 1950. The watch designed in honour of the aircraft is the only one in the series with a ceramic bezel paired with a matching black dial with white contrasting chronograph counters and red and orange elements recalling the roundels and markings found on the plane.
“Our watchmaking DNA is what dominates here, while the interpretations of the four aircraft give the series its emotion and bold graphic appeal. Taken together, these elements evoke the spirit of early flight,” says Breitling Creative Director Sylvain Berneron. “We can’t forget that Breitling pioneered aviation tool watches like the Ref. 765 AVI. That heritage is so strong, we had to not only keep it intact, but rewrite it for the 21st century.”

Other than their differing colourways, the Breitling Super AVI B04 Chronograph GMT 46 watches enjoy most of their specifications in common including a 46mm case, oversized crown at 3 o’clock and knurled bezels providing optimal grip for those wearing thick gloves in the cockpit. The bi-directional ratcheted bezels also offer pointers and 12 hour scales to pair with the GMT hands and 24 hour inner bezel. The cases boast 100 metre water resistant ratings, cambered sapphire crystal with anti-reflective treatment on both sides, and screwed steel exhibition case backs decorated with an image of its corresponding aircraft.
As with all Breitling pilot’s watches, legibility is made a priority with each Breitling Super AVI B04 Chronograph GMT 46 watch adorned with a mass of Superluminova coated hardware including luminous hands for the hours and minutes, Superluminova tips for the GMT and central chronograph seconds hands, glow in the dark Arabic numerals and a rather unique lume-accented chronograph counter at 3 o’clock. The engine behind these complications is the Breitling Manufacture Caliber B04 automatic winding movement with a 70 hour power reserve, column wheel and vertical clutch mechanism, integrated date window and COSC certification.